Connected by blood ties and bonds of friendship, the Hell Yeah! world chronicles the lives and loves of a family of Texas men and women, the McCoys, who live by the code of the cowboy. Adventure, unabashed sexual tension and tender intimacy plays out in a saga of stories that offer action and humor, all set in scenic locales from the Hill Country of Texas to the mysterious bayous of Louisiana. The plots of the tales are as varied as our own lives can be, but the world is one where right prevails, love conquers all, and holding out for a hero is not an impossible dream.

Check out our RAFFLECOPTER at the end for a chance to win all kinds of prizes!

He�s a spirit looking for redemption�she�s a heart looking for a soul�Separated by time� bound together by a love they can�t ignore� They will fight for his freedom, her heart, and a lifetime together. 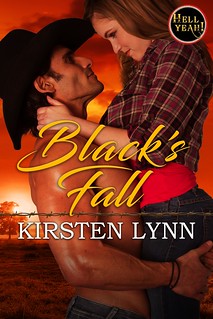 After attending four weddings in one year, Faith Bannon isn�t looking forward to wedding number five. Unlucky number five brings with it more than the attempts to set her up with everyone from best man to caterer. This time Faith is headed back to Texas and a past that haunts her. When she witnesses a ghostly reenactment of man gunned down by a phantom posse, Faith questions her sanity and the intense pain she feels at the loss of a man she�s never met and who�s been dead for over a hundred years.
Johnny Black lived up to his last name right up until the night a bullet found the heart he�d offered to a treacherous woman. He expected damnation. He didn�t expect the hell of reliving his death every year on the anniversary he was shot down by a posse. Having a woman cry over him wasn�t ever a part of the recreation until Faith Bannon did just that. Now he has one chance to avoid eternal damnation and that�s to help Faith find her heart.
Despite the obstacles, Faith and Johnny are willing to take a chance with their hearts trusting only Skye and Noah McCoy with the truth about the tall, dark, and handsome Texan escorting Faith. But there are forces unwilling to see Johnny outside of purgatory and they�re willing to kill Faith in order to keep him.

The electricity on set between two of Hollywood�s rising stars could light the city for weeks. But can there be a happily ever after when the camera turns off? 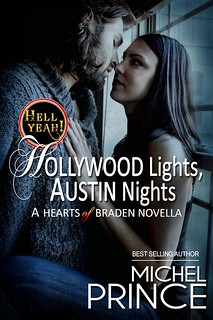 Soren Birch wrote a movie deserving of the best Hollywood has to offer, but as a first time screenwriter, he�s stuck on a shoestring budget. Vision Star has offered him a deal and set him up in Austin, Texas. Now the actor turned writer will be donning a few hats, including director, as his passion piece comes to life.
In Hollywood, Alicia Winters� star is rising, but she is slowly learning quantity over quality after being kicked off her latest set. She then finds her way to her sister�s bakery in Braden, Iowa. A few days of rest and little tough love has her ready to take a chance on a small budget film in Austin.
A dream actress and a company willing to take a chance on him, Soren is beginning to think he might actually make a name for himself beyond being a sex symbol. Can his luck finally be changing or will his attraction to Alicia derail his dream before it even starts?
Kindle Worlds

He would protect her at any cost.
The equalizers are on the move, and the stakes have never been higher. Or hotter. 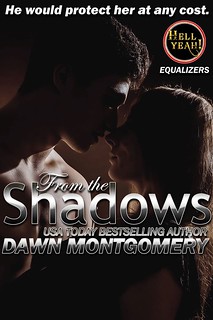 He would protect her at any cost.
The equalizers are on the move, and the stakes have never been higher.
Women are disappearing from Galveston Island�s port, and Gordon McKay faces his first mission as an equalizer: bring down the human trafficking operation and the organization responsible. He expected to find trouble. He just didn�t expect it to be in the form of a take-no-prisoners firebrand like Destiny Miller.
Destiny lost her brother to war two years ago, and now a stranger claiming to be his friend comes waltzing up the steps of her bed and breakfast. He has more secrets than truths, but the eyes never lie. She�s caught in a whirlwind of trouble and somehow Gordon McKay is right at the heart of it.
One kiss was enough to ignite the flames. Another could burn away everything. Should she trust the man or the memory of the brother she thought she knew?

Dust on the Bottle 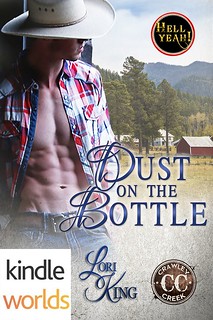 Freelance Photographer Monica McCray has one goal, never pass up an adventure. Coming to Crawley Creek Ranch, she finds one.
Kyler DeWitt�s inner demons are close to killing him. Booze and self-pity leave him a ticking time-bomb.
When these two forces collide, a passion like no other ignites. Now Monica realizes the adventure she wants includes North Dakota roots, but will she be enough to keep Kyler grounded or will she be just like the dust on one of his bottles?

A pampered princess risks everything for love. 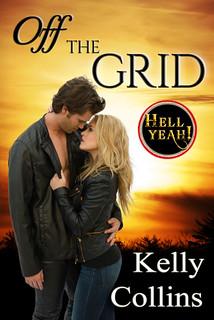 Twenty-five-year-old Nikola Stone has three months to convince her famous parents not to disinherit her. Scrambling to prove she�s more than a pampered princess, Nikola finds herself living on a wind and solar farm in Texas, owned by super hot environmentalist, Colton Becket.
Without the safety net of her silver spoon life, Nikola discovers living off the grid may in fact hold the key to her inner happiness, and bring her the surprise she never would have expected�true love.
But when Colton�s dream is threatened, she does the unimaginable to try to save his farm. Her desperate actions mean losing her inheritance for good�and possibly losing the only person who has ever truly cared for her.
Will her plan backfire, or will Nikola find out that giving up everything means she can actually have it all?
Find out in Off the Grid.

All the King’s Horses

When the girl on the high horse belongs there, it�s a hell of a job to tame her� 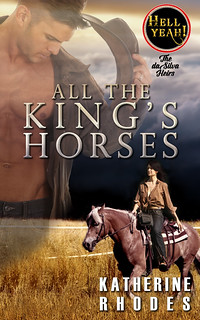 One million-dollar horse.
One family farm.
One Jersey Girl with an attitude.
One recipe for complete disaster.

Well, if anyone had asked RJ Miller, anyway. To make matters worse, he started the whole deal firmly planted on the wrong foot–and Lucy da Silva made sure he knew it.
Visiting the Double Down Ranch outside Austin, Lucy is there with her sister Fatima to purchase a stock of breeding horses for her family back in New Jersey. She knows her horses. She knows her farms. She knows her mind–and she knows she doesn’t like RJ Miller.
Despite the rocky start, RJ finds himself falling for the high-spirited woman. It seems like there’s nothing she can’t do: ride, rope, clean, cook, and dance. Lucy can’t seem to stay away from RJ either, and they find themselves riding more than horses.
If only life were simple: find the girl, fall in love, happily ever after. But with people plotting to get their hands on Double Down’s beautiful thoroughbred, King’s Dominion, Lucy has to admit a truth she hid years ago to save RJ’s sister and her own life…

Hell Yeah! The New Orleans Mob doesn�t stand a chance against A man in love and the Hell Yeah crew. 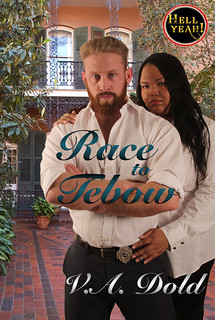 Bullets are flying, and Sheena Savoy is running out of places to hide.
In the wrong place at the wrong time, her boss wants her silenced-permanently.
The only upside is the sexy protection she�s been assigned.
Bastien Benoit, a no-nonsense, by the rules WITSEC Marshal, has never wavered. That is until Sheena Savoy. The sexy, courageous woman who makes him feel things he has no business feeling for a witness under his protection.
There�s a mole at WITSEC, and the only person standing between Sheena and a bullet is Marshall Benoit. Forced on the run, Marshall Benoit knows of one place to hide where the Syndicate won�t find them.

Can they make it to Tebow Ranch in Time?

When the battle of the sexes stops being fun and games because someone loses their heart! 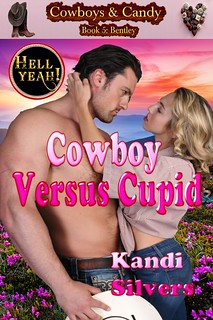 Ms. Cupid�advice columnist supreme. Women idolize her, and unbeknown to Joselyn Armstrong, men hate her. She works from home and no one other than her best friend, the Editor of Glam Buzz Magazine and her favorite ice cream flavor know her professional identity. So she doesn�t date and her family finds her odd. Josie is perfectly happy helping others find love and staying out of the crossfire, but then came Bentley.
Bentley Cutes often pretends to be his twin brother Ross. Too bad, he doesn�t have a twin, only an older brother and younger sister. He likes his secret life in San Antonio, Texas, doing what he wants and of course the rest of the time�most of the time, has his restaurant and bar, his family and friends in Kerrville. He likes everyone except Ms. Cupid and has a minor vendetta against the faceless columnist who needs to be stopped�and he is just the man for the job. Then Josie walks into his life and he realizes he was wrong. Not only about the lie on his identity, but about Ms. Cupid herself.

Her Hell No Cowboy 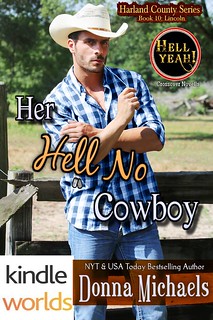 Ever since his first deployment, Lincoln McCall came home a changed man, swapping life philosophies with his twin brother. No more playing it safe, or by the rules, or looking for �Miss Right�. Hell no. But holding onto that concept is hard when Linc falls into a pool with his arms full of the one that got away.
Coming out of the fog from her husband�s death, Ashely Patterson wants to live a little, have fun�feel alive. So when the sexy cowboy she crushed on in her youth hires her to work on his house, she gives herself permission to enjoy the attraction sizzling between them�after all, she�s only there temporarily, and he doesn�t do relationships.
But when their feelings turn serious, she�s in a heap of trouble. Linc is in the military. So was her husband and that got him killed. She can�t risk her heart to another man who could deploy and never return. Hell no. It was better to leave and take her heart with her.
Now, if only she could figure out how to get the cowboy to give it back.

Enter our Rafflecopter for a chance to win all kinds of prizes!