Remington Stringer has never been like most girls. She’s outspoken, brazen and wants nothing more than to escape the Nevadan hell hole that she calls home.
On the brink of eighteen, with a deceased mother and a well-meaning, yet absent father, she is forced to fend for herself. The only person she’s ever had to depend on is her borderline obsessive stepbrother, Ryan. But, what used to be her anchor is quickly becoming a loose cannon.
When Remi gets the opportunity to attend the best private school in the state during her senior year of high school, she jumps at the chance. Then she meets Mr. James. Ornery, aloof, and totally irresistible.
Most girls would swoon in secrecy.
Most girls would doodle his name with hearts in their notebook.
But Remi Stringer has never been like most girls. 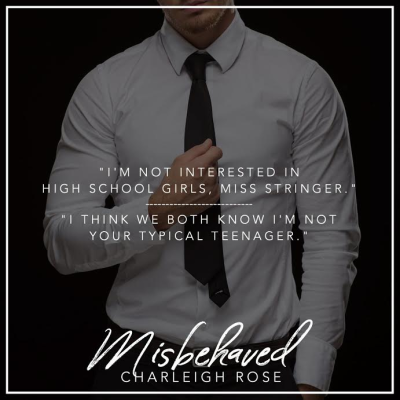 Charleigh Rose is a secret duo of romance authors who teamed up for the sake of fun, sexy smut. Our philosophy:1. Our heroes should always be so alpha, you won’t be able to read them in public.
2. Heroines will always be sassy, strong and take zero sh*t from their men.
3. Taboo, dark, twisted, weird, bizarre and original. We won’t give you what you’ve already seen a million times before.
4. The sex will be explicit, hot, smutty, and completely insane. Make sure your door is locked and you have a toy around when you read us.We’re dedicated to fulfilling your fantasies and to having fun with each other. We created this pen name so we can play around with our readers and each other (naughty naughty). Buckle up and join the ride!