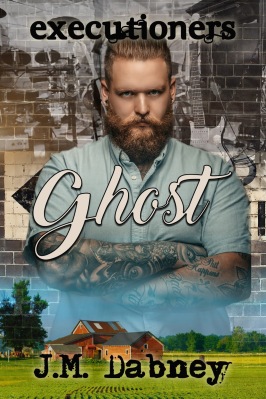 Gideon Jane earned the name Ghost for his reclusive nature when he joined a group of guys in Powers, Georgia in a band called Executioners. It had been his way of settling into small town life after living in New York for the past twenty years. He loved the band and his small organic farm. What he didn’t love was being single, but it appeared it was his new reality. He didn’t want his ex back, although he did want something. What that was eluded him until the evening he walked into Nightingale’s Books.

Small town girl Harper Sage knew pain, and she’d lived with it—she had the scars both mental and physical to prove it. It would’ve been easier to hop in her car to find safety and anonymity, but Harper stayed to prove she was stronger than hurled fists and bruising prejudice. She found herself within the safety of a close-knit group of rough bikers and bar bouncers. That didn’t mean it was all perfect.

What’s a girl to do when she craves normalcy and acceptance: she just smiles. Choices are made, some with dire consequences and others that bring her closer to her dream. Will she make the right decision or finally discover escape is her best option?

J.M. Dabney is a multi-genre author who writes mainly LGBT romance and fiction. She lives with a constant diverse cast of characters in her head. No matter their size, shape, race, etc. she lives for one purpose alone, and that’s to make sure she does them justice and give them the happily ever after they deserve. J.M. is dysfunction at its finest and she makes sure her characters are a beautiful kaleidoscope of crazy. There is nothing more she wants from telling her stories than to show that no matter the package the characters come in or the damage their pasts have done, that love is love. That normal is never normal and sometimes the so-called broken can still be amazing.